Quality pure Horned Dorsets represent the original Dorset as much as we can access in this modern era. As such, we have utilized two such traditional rams over the years to keep our flock in touch with important attributes from Dorset roots. From these rams, we have gained or maintained substance, dimension, and strong maternal attributes such as natural Fall lambing and excellent mothering.

The Horned Dorset Ram featured below, affectionately known as Tank, is the second such pure Horned Dorset ram we have added to our flock and who's genetics are still very current in our ewes. He's made a lasting impression in the flock though he is no longer on the farm. Tank was returned to his breeder, Mark Hess, before we moved to Virginia.

I have retained this page on our website to show the quality and depth in and behind this ram, qualities which have been passed on to his daughters and sons. I have used his son, Tank Junior (aka TJ), extensively, in conjunction with an outcross ram, and still have daughters of Tank producing twins and triplets at nearly 10 years of age. I will be judiciously using two TJ sons from different maternal lines over the next few years in conjunction with outcross rams, as well.

Mark Hess shown holding our ram lamb #153 just before we bought him from Mark. Thanks Mark, he's gorgeous! 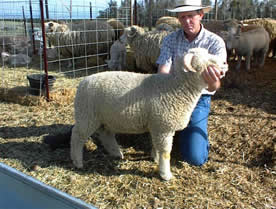 And "gorgeous" is exactly what he became...

Tank, as we named him because of his stout and thick stature, is pictured here in May 2003 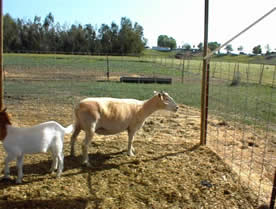 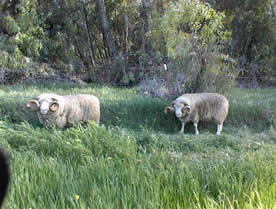 #153's great grandmother was still producing and is pictured here at age 13. She was the dam of 153's grandsire pictured above. The grooves you see on her are from handshears. Mark handsheared her each year as she grew older "because it's easier on the old gal". 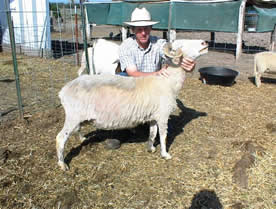