Dorset sheep are a medium-sized wool breed of sheep originally from the Down region of England. They are best known for their maternal traits, including excellent mothering and ease of lambing, as well as producing vigorous lambs. 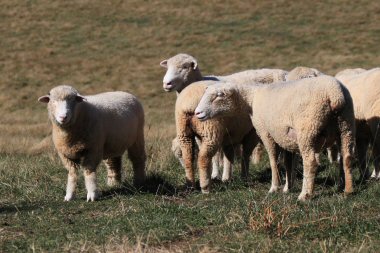 The breed was originally horned in both sexes but a polled mutation occurred in the mid-19th century. Now the breed is separated into various classes of Polled (hornless sheep descended from the mutated polled sheep), Horned (sheep with horns that do not have andy polled sheep ancestry), Normal Horned (sheep with horns but which have polled Dorsets in their ancestry), and Scurred (those incomplete horns that usually remain very small and close to the face).

Their wool should be of a medium-soft Down type, though many US flocks have altered their breeding programs resulting in softer, crimpier flocks in some instances. The sheep should have clean (free of wool) legs up to their hocks and knees, clean faces and minimal belly wool.

Our Dorset sheep are predominantly polled and selected primarily for their accelerated lambing rates, lambing percentages, and their natural out-of-season lambing patterns. Excellent mothering, physical soundness and carcass traits are also selected for in our flock in order to develop an easy-care flock that produces well for the shepherd who works on or off the farm.

Some Horned Dorset bloodlines have also been infused into the flock to emphasize breed type, character, thickness and the other traits described above. These are the traits that make a Dorset truly a Dorset!

Our sheep do not resemble the modern show Dorset sheep, but rather they remain true to the Dorsets of early 1970's and before, including their thick stature, out-of-season lambing capabilities, superior mothering abilities and strong carcass traits.


For more photos of our sheep, please go to Our Sheep