'Elles Belles CD, TD, OTDs. She was our first and most wonderful of collies, a product of the famed Arthur Allen's Moss x Gilchrest Spot lineage cross. She will always be missed but her descendants continue to romp through our household through descendants of her son, Gary. Glenrose Hannah and Glenrose Kit are 3rd and 4th generation descendents of Belle. 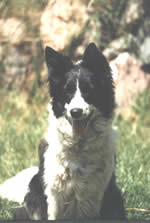 WTCH Bridges' Flo, sadly no longer with us but she lived to the ripe old age of 15. She is one of our two foundation bitches and is the mother of Sadie and Allie and the grandmother of Hope and Hannah.

Red Rose Sadie OTDs, AAD left us in July 2003 after a two month battle with liver disease. She was a very special dog with tremendous power & pressure on livestock. She could move any livestock while still being gentle enough to work babies. She was a special friend, companion and partner and will be very much missed.

Sissy, pictured here at 4 years old, passed away in early September 2004 from bone cancer. She was only 5 years old but had made herself the official "Walmart greeter" here at Glenrose Farms by day as well as her night job as guardian dog. We never had a mountain lion attack our sheep while she was on duty, although we heard them in the area frequently. She did live long enough to pass on her night job to our new guardian dogs "Chip" and "Bart" MORE

Glenrose Allie AAD, HTD I-s, STDds - Allie passed away in 2007. We gave her to our dear friend Stephanie Solario in CA a few years ago as a trainee herding and agility dog for Stephanie to practice on. She has always been better at agility than herding (but we love her anyway) and has achieved the Advanced level in USDAA in that sport. She and Stephanie became fast friends and Allie remained with Steph into her retirement and passed away peacefully under Stephanie's excellent care. 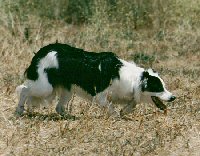 Hope left us on June 19, 2010. She was 13 and a half years old.
She battled an oral tumor for some months, and had also been dealing with some nuerological issues in her spine that resulted in some hindquarter lameness, incoordination, and weakness from time to time. She was on pain medication for both conditions and had a good quality of life overall, ruling the roost in her own way.

Hope was an accomplished herding dog in her day, with top 5 placements in Pro-Novice competitions on big courses prior to her losing her hearing prematurely. But she continued to compete in arena and smaller scale trials for awhile after her hearing loss was too great for Border Collie courses. She was also one of my right-hand dogs on the farm in Jamul, CA. By the time we moved to VA, however, she was too old and too deaf to do much except to bring in a few coopertive sheep that were nearby just to make her feel good now and then.

She was and always will be WTCH/HTCH Glenrose Hope ATDsdc, HTD III-sg, HRD III-s, TC, CGC and just plain a good dog.