Our Flock Ancestry and Development:

Our first Dorset ewes came from the California Polytechnic University (Cal Poly) flock, located in Pomona, CA, in the very early 1990's. The Cal Poly Dorset flock was soon disbanded and we purchased a few more ewes from that flock in the dispersal. Some of these ewes became our foundation ewes because they possessed natural Fall (out of season) lambing and naturally accelerated (more than one lambing per year) lambing, as well as excellent mothering abilities and moderate body type. Those bloodlines are still active in our flock. 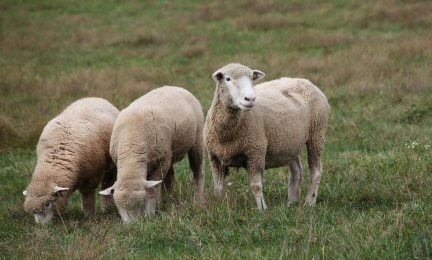 Some of our Dorset ewes out on pasture.

Our first Dorset ram came from a purebred registered polled Dorset flock in central California. After that, we picked up additional purebred Dorset ewes where we could, always searching for ewes from flocks with natural Fall lambing traits at the very least, and preferably accelerated lambing, as well.

As we acquired new breeding stock, the ewes were tested for out of season and accelerated lambing by attempting to breed them for Fall lambs and then leaving a ram with them most of the rest of the year so that rate of rebreeding (acceleration) could be assessed. Ewes and ewe lambs were not retained in the flock if they did not conceive for Fall lambing and then rebreed in less than 9 months in a timely manner, though some latitude was allowed for very young ewes, of course. 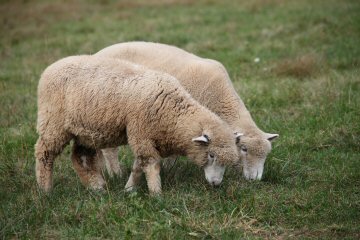 Two lovely ewe lambs, one a Spring lamb and one a Fall lamb. All of our Fall lambing is natural. No hormones are used to induce ovulation at any time. We select for naturally aseasonal and accelerated ewes.

Our flock goals include natural Fall lambing, other aseasonal lambing (in order for ewes to lamb on an accelerated lambing schedule, they will have to lamb at any time of the year), and lambing every 6-9 months. Litter sizes are usually twins and triplets but singles do occur as ewes need to rest periodically. Our ewe lamb goals include first lambing between 12 and 15 months of age.

Finding flocks in our region, which was Southern California at that time, that shared our goals of natural Fall lambing, aseasonal, and accelerated lambing was very challenging. We were told at one point that we were probably the only strictly production-oriented polled Dorset flock in the entire state of California. Given that we had buyers coming to us from as far away as the Arizona/CA border and New Mexico, it was probably safe to say we were the only such polled Dorset flock in the desert southwest, as well.

An older ewe of approximately 10 years old is in the foreground and one of our middle-aged ewes is in the background. One of our ewes was still lambing at aged 14 this Fall and produced twins twice in her teens. Our flock is healthy, long-lived, and prolific.

Our next ram was a pure Horned ram from the McCrumb flock in Pennsylvania purchased through a local flock reduction sale. We later shipped in some young ewes from the K Bar K Farm flock, also of Pennsylvania.

Later, we brought in another pure Horned ram, this one from Mark Hess, also located in central California. Photos of our Horned Dorset ram, Hess 153, and his ancestors may be seen on a separate webpage. Hess 153, aka Tank, served our flock very well and was later returned to Mark to carry on Tank's good work and return his genetics to the Hess flock. Thanks again to Mark Hess and family for this lovely ram. I brought several of his decendents to Virginia with us.

More of our ewes, including a Normal Horned ewe sired by Hess 153,
a ram from Mark Hess that performed very well for us.

As stated above, we have used two pure Horned Dorsets over the years and these rams, first the McCrumb ram and later Hess 153, have contributed significantly to the thickness, stature, natural Fall lambing, and maternal traits of our flock.

Further, our other genetic influences including the Cal Poly, Pomona, Dorset flock, was comprised of several other regional early show/performance flocks. Other California flocks have also been judiciously integrated into our flock.

Additionally, K Bar K Farm has been represented in our flock in the form of two polled rams and 6 ewes over the years. The ewes and rams from the K Bar K Dorsets have made excellent contributions to our flock. Thanks to Kathy and Ken Soder, we now have their bloodlines tracing back to Carson, Edgar, and other quality flocks that Kathy has blended so skillfully to produce solid working sheep. 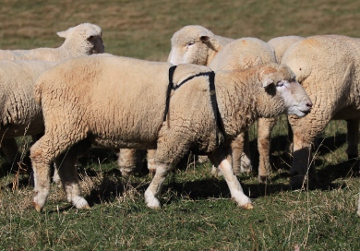 This is our newest young ram and he is from K Bar K Farm. Our thanks to Ken and Kathy Soder for this handsome ram from their recent UK genetics importation. As you can see, he's hard at work for us!

Now that we are located in Southwestern Virginia (SWVA), we continue with our flock goals and are adding predominently grass-based performance to our flock goals.